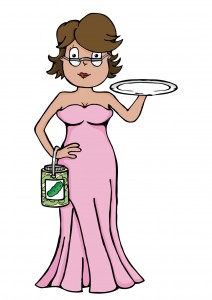 Becoming pregnant is one thing, being pregnant the other one. Pregnancy is a natural, for the most part deliberate event. Sometimes an undesired one, but I don’t considerate latter. So, you’re pregnant in the early stages. You purchase a pregnancy test from the pharmacy, control the first test with a second one – you don’t want to make your trusted gynecologist a fool of you. After the visit at the doc, you’re leaving the practice pregnant. What now? You’re roaming the streets and no one knows that you’re pregnant. No one sees it, no one can even imagine it. A strange feeling. I’ll be grandmother and no one will notice when I’m en route with my daughter.

Contemplating my own pregnancies, I remember nothing bad – no sickness, no problems, no nothing. Everything was fine. I certainly know that things aren’t always fine. Pregnancy offers it all: from running well to forcing you into hospital for months. I remember one of my girlfriends appearing at our wedding with a bucket …

At first, it seemed that my daughter would be untroubled by morning sickness. Everything appeared to be fine – until it started: My poor dear child has been throwing up each and every day, or, to talk frankly, she pukes her guts up on occasion.

As a good mother, you always suffer with your daughter, no matter if your child tumbles or, as it’s the case now, is suffering from sickness at the beginning of her pregnancy. As a good grandma-to-be, I gave her adequate advice: eat and drink something before getting up, drink this tea and that tea, do a headstand, and much more. Thanks to the internet and her own initiative, she found some ineffective tips herself. Unfortunately, nothing helps except from taking a bucket with her wherever she goes. So what shall I do now? I can’t help but show solidarity, which is why I also take a bucket with me wherever I go. You can get those buckets according to the event in different sizes, shapes and colors. When I go grocery shopping, I take the big red one with me. It accommodates a considerable amount of my groceries. When I meet my friend for kaffeeklatsch, the medium mauve one meshes with my black jeans and the pink shirt. When we, grandpa-to-be and me, recently joined an elegant social event, I chose the small cute one which had contained pickles before. I pasted it up with pickles, except for the sign which says “Pickles”.

We must have appeared kind of awkward: grandpa-to-be wore a smoking, a matching shirt, patent leather shoes and a bow tie. Grandma-to-be wore a full-length elegant gown showing my décolleté, a new super-chic clutch under my arm – meshing with my high heels – while the little pickle bucket was swinging around my right wrist. What an entrance! The people turned their heads at us, rather at me. After we had climbed the stairs like royals, Grandpa-to-be subtly raised the distance between us. We entered the ballroom and looked for our table.

A tubby, noodle-haired dame turned her head at us, while she kept walking. Unashamedly, she continued turning her head at us. So did the waiter, who was poising the tray of full champagne glasses over our heads, while he certainly reasoned which kind of booze I hid in my little bucket. I saw it coming, but before I could yell “Caution!” they both collided. The tray of the full champagne glasses started to shake, then overbalanced and abided by the law of gravity.

Noodle head, who was very short, landed in the champagne, which entirely disappeared in her curls and her gown. As a consequence of the weight added, the curls melted away and wet strands hang around her face. She, in fact, looked like a drowned rat, and I know now why people say so. Later, I met her again at the buffet. She seemed somewhat refurbished and smelled like having been on a binge. She struggled to ignore me, and looked stubbornly straight ahead, whereas her eyeballs seemed glued to the corners of her eyes. My mother used to tell me, “My dear, don’t cross your eyes, or they will stay like that one day!” which I naturally believed as a child.

Her companion was a gaunt bony man who was pleasurably piling his plate with potato salad and pork roast when she nudged him and told him that she wanted to know now whether I took the little bucket in order to fill it with food. To be on the safe side, Grandpa-to-be had remained seated during my stop at the buffet.

I might have gotten well used to my bucket companions, however, after this event I’d appreciate it if it all soon came to an end. It’s not that it bothers me to take the buckets with me, but my daughter deserves to enjoy her pregnancy at last.