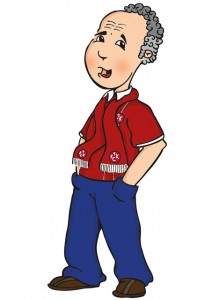 Some days ago I told you that the bathroom cabinet of Grandpa-to-be is slowly but surely bursting. Here a little jar of cream for before and after, whatever kind. There a little tonic for the face, one for the décolleté, one for … well, you wouldn’t like to know. But which beats everything: He purchased two facial masks, one peel-off mask by Sandstein and one lifting mask by Visageglatt. So it has come to this: He has been in the bathroom for hours. I saw him sneak past the kitchen, he assumed I wouldn’t notice since I was carefully reading the paper. He was creeping along the wall, like a chameleon adapting to the pattern of the wallpaper, playing the invisible.

No sooner is the bathroom door locked behind him than it opens again five minutes later. He comes into the kitchen, murmurs an astonished “Good morning”, grabs the magnifying lens which is still lying on the table from the eve and returns to the bathroom. Aha, I think, neither he is able to read the large-lettered manuals written in tender gray on white paper. I, grandma-to-be, am still sitting in the kitchen, about to finish the Sunday paper. He’s still in the bathroom. By now, I’ve finished breakfast. He’s still in the bathroom. I’m thinking about knocking and asking if everything’s fine, but toss the thought in the end. It’s ten o’ clock, it’s eleven o’ clock – what on earth is he doing in there? No woman would need so much time. I knock, he mutters that everything’s okay. Suddenly, he turns the radio louder, I can hear it through the closed door, but can’t understand what’s going on. Shortly after, he flings the door open and, wearing a towel around his waist, rushes past me into the bedroom while holding his cell phone in his hand. I stand like a rock in the hall because he’s wearing the lifting mask on his face. For God’s sake it isn’t the cucumber face mask, whose ingredients would be spread around the hall by now.

I’m about to follow him into the bedroom, when he meets me half-way. No, he is not wearing his birthday suit, but a jersey of 1. FCK – for the non-soccer fans out there: 1. FC Kaiserslautern, one of the clubs which made soccer history in Germany, Fritz Walter’s home club, a player of the World Cup in 1954. The mask on the face of Grandpa-to-be, which has congealed by now, bars him from speaking comprehensibly. He waves excitedly about with his cell phone in one hand, in the other hand he’s holding another jersey. He points at the display which says: “I have two tickets for you for the cup match Hertha BSC versus 1. FC Kaiserslautern on 20 December in Berlin.” There he is, grandpa-to-be: red-white scarf, a shirt labeled 1. FCK which slightly tightens at his tummy, each in red and white. The red devils from Betzenberg. He holds out the other jersey towards me and I suspect something bad.

He wants to go to the stadium on 20 December, when Hertha BSC and 1. FC Kaiserslautern face each other in the cup match. Still agitated, he tries to keep on talking, whereupon I advise him to put this mask off his face. Otherwise his mimics will freeze as if he has had Botox injected. He immediately rushes into the bathroom, comes back soon and – still excited – asks me what I think about that. Basically, I don’t mind, but particularly, I’d reconsider that for I can’t foresee what’s going to happen if we show up in Hertha’s block wearing jerseys of their opponents. We already did this once when MERC challenged Preußen Berlin in ice hockey. Well, Preußen won, but I couldn’t help but cheer when MERC scored a goal.

Honestly, would you do this? In iciness – we’re supposed to get a rough winter – would you be standing in the opponent’s block wearing the other’s jerseys? A warm seat would be adequate, but those tickets don’t seem to include an admission wristband. In addition to that, we mustn’t forget that grandpa-to-be and grandma-to-be are in an advanced age, thus, little joint aches and pains are predetermined by the low temperature expected. Instead of caring for his beauty, grandpa should rather work out right away in order to become fast – what if Kaiserslautern win (they certainly will) and we’re forced to head for the hills from the Hertha block? The adrenalin rush might as well serve as fountain of youth that night, but I’m not so sure about that.

Come to think of it, this is all kind of weird. We don’t have any 1. FC Kaiserslautern fan clothing, except for one shared scarf, and what is this strange sound full of grunt, actually? I open my eyes, look around. I’m in our bedroom, and next to me grandpa-to-be is lying in bed, snoring peacefully.